Four gold, one silver and one bronze was the impressive return by the four Derry City Track Club athletes from the Irish Masters’ Indoor Athletics Championships in Athlone.  It was another busy weekend for Derry City athletes with successes indoors and on the roads while the juveniles wound up their cross country season at the Antrim International.

Star of the weekend was undoubtedly Tim Shiels who notched up an impressive double in Athlone.  Just seven days after winning the British 800m title, the Omagh-based athlete was back on track to defend his Irish title at the same distance. After leading all the way in London, the 39-year-old changed his tactics on this occasion to wait until the final straight before powering through for the gold medal in 2:01.38.

However, Pastor Tim was not content to rest on his laurels and was back on the track less than an hour later.  After some problems with his blocks before the race, Shiels made a steady, if not spectacular, start to the 400m and trailed by five metres in third place at the halfway point. A stunning injection of speed down the backstraight for the last time saw the long-striding DCTC man hit the front off the final bend before going on to complete an impressive double in a time of 54.50 seconds. 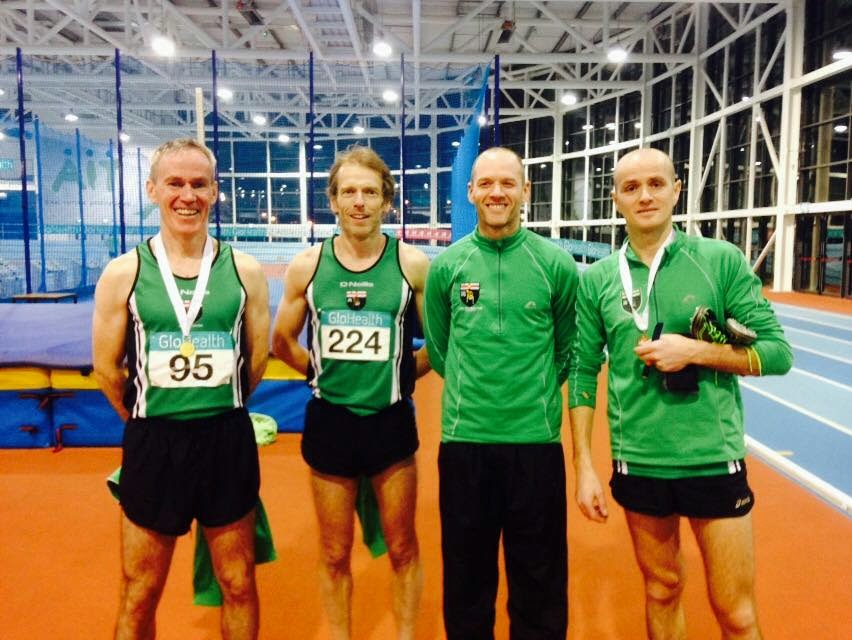 Robert Bigger started as hot favourite for the M55 800m after posting the fastest time in the UK and Ireland recently but found himself at the front too early in the race and lost out on the gold medal in the final 50 metres.  The Aghadowey man was disappointed but channelled his frustration into the 1500m later in the afternoon.  On this occasion, he waited until the final bend before sprinting clear to lift the gold medal.

Cathal McLaughlin had also been in action at the British championships but had spent the week afterwards in the United States on business. He landed back in Dublin on Saturday and made his way to Athlone by bus on Sunday morning.  Undaunted by the unorthodox preparation, he turned in a perfect display of tactics before hitting the front late in the race to claim the gold medal in the M45 1500m for the third consecutive year.

Another man with a less than satisfactory lead up to the championships was Adrian Boyle who travelled down to Athlone on the day of the race.  Boyle is a diabetic and life became further complicated for him when he was unable to control a climbing level of sugar in his blood.  Nevertheless the DCTC man went out and ran a very composed race to take third place in the M35 1500m with a creditable 4:20.76 clocking.

Earlier Darragh Crossan had re-written his best time when taking runner-up spot in the Cara 10K in Bundoran.  Crossan went through halfway in 17:40 but slowed in the hilly second half of the race to cross the line in 36:40.  The previous night Gary McGee and Malcolm McCausland had taken 4th and 6th in the Cara 5K, winning the M40 and M60 categories respectively.

Lily Tourish was the best of the DCTC juveniles who took part in the under age races at the Antrim International Cross Country.  Running against girls up to two years older than her, the Eglinton girl did well to take eighth behind some much more experience athletes.  There were tough baptisms for Ben Mellon and Bronagh Downey but both will gain from the experience.