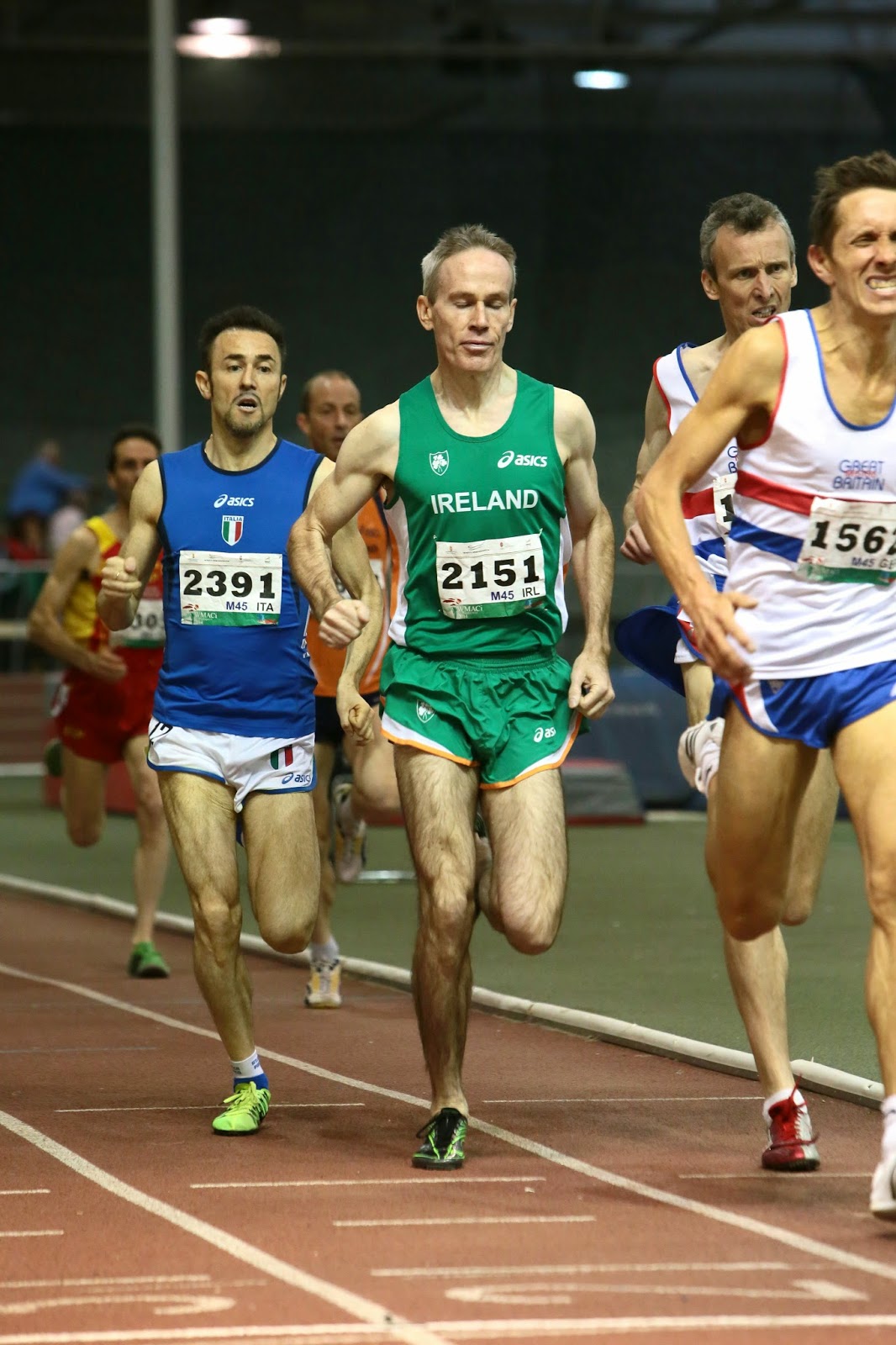 Derry City Track Club's Cathal McLaughlin ran one of the best races of his career to grab a silver medal in the European Masters' Indoor Athletics Championships in Torun, Poland.  The 47-year-old company director was one of three DCTC athletes in action at the championships with the trio all acquitting themselves with credit against the cream of the continent.

McLaughlin went into the M45 1500m final with his confidence high after winning the Irish title for the third consecutive year.  He sat in the chasing back during the opening laps while home favourite Murawski carved out a lead at the front.  The English favourite Adrian Haines, who had beaten McLaughlin to the silver medal in the Worlds 12 months earlier, soon fell off the pace leaving Dutchman Joosse to head the pursuit of runaway Pole.  It was only with just over 100 metres left that McLaughlin turned on the afterburners to accelerate past Joosse and sprint into the runner-up spot in a season's best of 4:14.24.

The European silver medal capped a fine indoor campaign in which he won Connaught, Leinster and Irish titles.  He also finished second in the British championships over 800m, missing out on the gold medal only in the final few metres.  He has also excelled on the cross country representing Northern Ireland in the British & Irish Cross Country Championships in Nottingham as well as clocking an impressive 16:30 on the roads for 5K.

It may disconcert slower runners, who regularly cover in excess of two hours on training runs, to know that all this is achieved on less than 30 miles per week and with no run longer than one hour!
Adrian Boyle exceeded all expectations with a sixth place finish in the M35 800m.  The Ballykelly resident ran a strong heat to qualify for the final as one of the fastest losers in 2:03.31.  Even better was to follow in the final with Boyle following the strong early pace to finish up sixth in a personal best 2:02.16.  The DCTC man can now concentrate on breaking two minutes for the distance when the outdoor season kicks off later this month.

Malcolm McCausland was disappointed to arrive in Torun to find out that the cross country course included 300 metres of tarmac meaning that he had to run his race in trainers.  Athletes from other countries had been made aware of this before their arrival.  Nevertheless he finished a respectable 14th and would have gained a team bronze medal but for an administrative error by the Irish team management.

Meanwhile new recruit to Derry City Track Club Chris Millar had the honour of being the first man across the line in the first Limavady parkrun.  Millar played the waiting game to perfection, allowing others to do the pacemaking before hitting the front on the final lap to cross the line in a personal best 18:23.  DCTC mentors have been impressed by Millar and already see him as a potential key member of next winter’s cross country squad.
Posted by Malcolm at 14:05